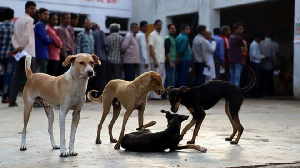 The Ghana Society for the Protection and Care of Animals (GSPCA) in collaboration with the Ga East, Veterinary Clinic has vaccinated 113 dogs and six cats against Rabies.

The exercise, conducted on 12th September 2020 in Dome-Konka in the Dome-Kwabenya constituency of the Ga East Municipality saw 67 male and 46 female dogs as well as six female cats vaccinated.

“This has become necessary because as human beings are being protected against diseases such as cholera, rabies, COVID-19 et cetera, animals also need some form of protection, hence the vaccination,” David Nyoagbe, Co-founder and Chairman of GSPCA told the Ghana News Agency on Sunday in an interview.

He appealed to the public, especially people who keep pets to take very good care of them, stressing: “Feed and water them and occasionally take them to the veterinary clinics for health screening.

More than 150 pet owners were at the free anti-rabies clinic to get their pets vaccinated, but the Ghana SPCA had just enough vaccines for only 113.

“This is one of the community projects we are embarking on for the rest of the year. This is a poor community with a high number of domestic animals,” Nyoagbe said.

Rabies is endemic in Ghana and it poses a major public health problem.

Between 2000 and 2004, 123 clinically confirmed human rabies cases were reported by public health facilities across the country, and between 2010 and 2014, 22 cases were seen at the Korle-Bu Teaching Hospital in Accra.

In September 2019, the World Health Organisation (WHO) reported that the spread of canine rabies had sparked a broad community response in the Ghanaian town of Kasoa.

The symptoms were evident: hypersalivation, hyperventilation, and hydrophobia.

According to the report, four-year-old Mawusi had been bitten by a neighbour’s dog.

With fever, headache and general weakness, the little girl showed signs of difficulty in swallowing any food or water.

Rushed to a hospital in the town of Kasoa, sadly she died almost six hours after admission.

An autopsy confirmed her cause of death as rabies.