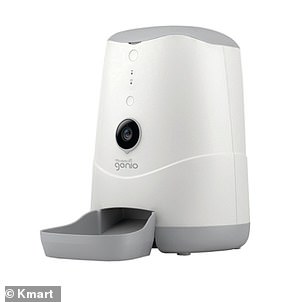 Kmart is selling a smart dog feeder that allows you to feed, watch and play with pets through your phone.

The Wi-Fi enabled gadget – which recently launched online and in stores across Australia – has a camera with two-way audio that live streams ‘fur babies’, so you can comfort and keep an eye on them while you’re out of the house.

Feeding times and portion sizes can be set through an app that syncs to the ‘Mirabella Genio‘ feeder, which sends alerts to your phone if there are shortages or blockages in the bowl.

Best of all it costs just $129 – considerably less than similar models with many of the same features from other technology brands.

Scroll down for video 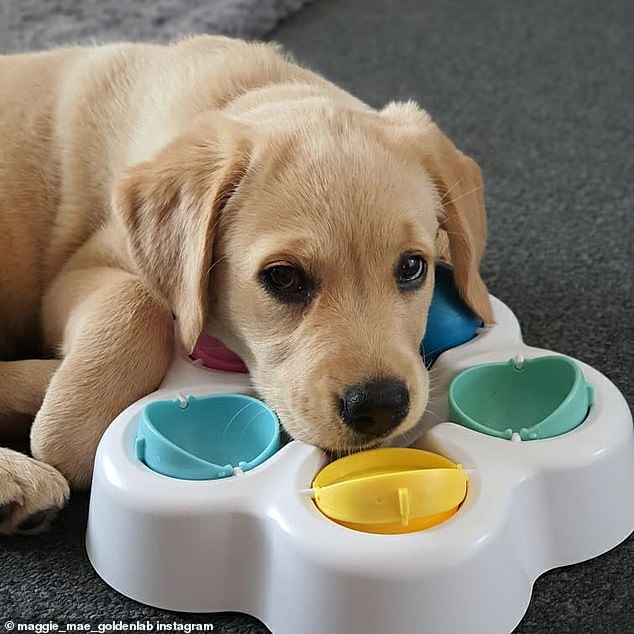 Furbo smart feeders cost $359 while Kogan devices are normally $249.99 but currently reduced to $159.99 on the Dick Smith website.

The Genio model just launched in Kmart is also available on eBay Australia where it is $95 more expensive at a cost of $224.09.

It’s not clear if the device is compatible with iPhone, Android or both operating systems.

Shoppers have been raving about the discount store’s latest release on social media since a Perth woman posted in a Facebook group on Sunday asking members if it was worth investing in. 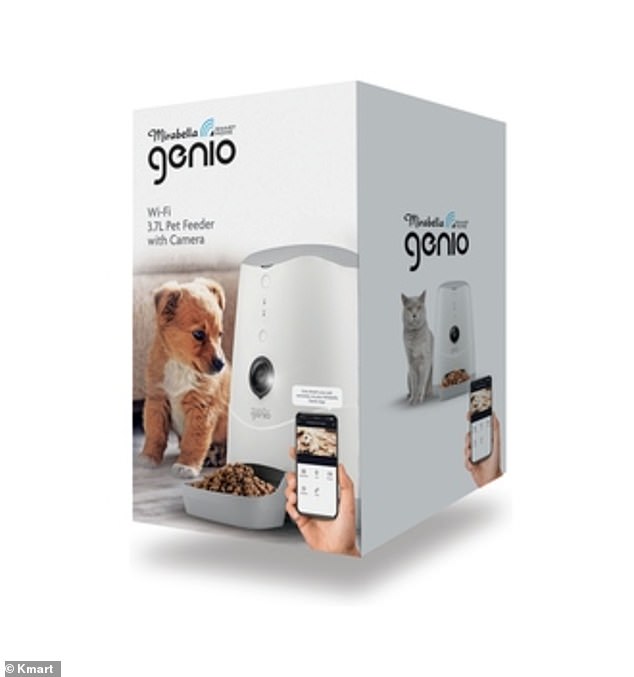 Feeding times and portion sizes can be set through an app that syncs to the feeder (pictured), which sends alerts to your phone if there are shortages or blockages in the bowl

‘Has anyone got this? Is the camera clear? I would like to watch my dogs while I’m at work…oh and feed them too,’ she posted alongside a photo of the device.

And people encouraged her to pick one up.

‘I got one last week for my puppy. It’s great!’ one woman replied. ‘You can hear, see and talk to them as well as feed them.’

‘I’ve had one of these for just over a year. I bought mine from Aldi, but it’s the exact same one, so just picked up the Mirabella one the other day as well,’ said a second.

She called it a ‘great product’ with a ‘decently clear’ camera and ‘relatively stable’ internet connection, but warned the Wi-Fi has cut out a few times while she’s been ‘looking or talking’ to her cat at work.

‘I’d highly recommend, they’re amazing products and I love the scheduling feature, makes my life so easy,’ said a third.

A fourth said she uses to for her cat and finds the camera ‘good and stable’.